The Next Day by John Porcellino 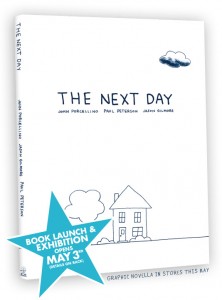 
Every year, nearly one million people die from suicide. More than 20 times as many people attempt it.... What if they had waited just one more day? The Next Day is a groundbreaking graphic novella constructed from intimate interviews with survivors of near-fatal suicide attempts. In this poetic and profound philosophical exploration, four seemingly ordinary people each offer haunting personal insight into life, the decision to end it, and what comes after. The Next Day graphic novella is an exciting hybrid of documentary film and comic book, cowritten by former social worker Paul Peterson and filmmaker Jason Gilmore, and illustrated by acclaimed cartoonist John Porcellino. Here is a preview look at this moving work.

My Review:
This graphic novel was based on a series of interviews with four people who survived suicide attempts. Each character have their own story to tell.
Suicide is definitely a very sensitive topic. When I was reading this I remembered Jay Asher's Thirteen Reasons Why. Hannah comitted suicide and she died. The characters in this novel however did not. They were given a chance to make things right. To improve themselves.
The book dealt with a very heavy topic but the illustrations made it a comfortable read. I loved the concept. A real eye-opener.
"I was constantly yelling at the voice in my head. It's a real voice but it's your own reality. We're all living in our own reality"
Posted by iamsandeemee at 10:21 PM

iamsandeemee
Hi! You can call me Sandee. I am 22 years old. I love books and music. Most of the time I am busy with work but I would never ever fail to read my books and listen to new music. My blog would consist of book, music and movie reviews. :)) This is the first time I would be maintaining my own blog so bear with me if its not really that well polished yet. Would just get to that later.

Bruno Mars - It Will Rain